16 September 2020
Tradition - Living Obviously, my preference would have been that we could have celebrated 30 years of regular services of Choral Evensong at St. Peter's, St. Louis with... services of Choral Evensong. Alas, that seems not to be in the offing.
It's a significant achievement! And so some kind of celebration is warranted.
Even before the current pandemic changed our plans, I was conceiving of this series as focusing on Evensong as a Living Tradition. And I've continued to do that.
We're taking Living Tradition online: livingtradition.online 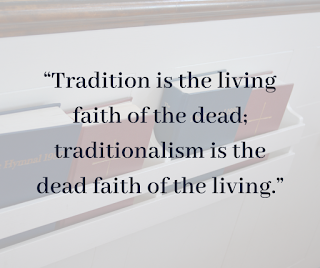 The series will begin in earnest on Sunday, September 27 with the first in a series of conversations about music and liturgy. You can read more about those conversations on the Living Tradition website.
Today, I've written a bit about tradition versus “traditionalism”. Even though I didn't have the words of Jaroslav Pelikan handy when I was planning this series, they must have been in the back of my mind when I was thinking about the idea of Evensong being a Living Tradition.

Read it here: Tradition Is the Living Faith of the Dead