30 May 2011
plagiarism - acoustic I have never before visited Trinity, Wall Street in New York or played a Marshall & Ogletree organ, but that doesn't stop me from having this opinion: digital organs are fake.

It doesn't matter if you have a multi-million dollar endowment and a sophisticated PR department and web presence: digital organs are still fake, no matter how much they cost.

How do we define what is real in the liturgy?

I think the first two elements here have become an accepted part of the worship experience given that they are modern conveniences and do not have significant artistic/creative implications.

Take for instance a concert of your local orchestra. If any pre-concert announcements are made, they will utilize a public address system.  The concert itself will not be amplified (I hope).

Likewise, as you enter the room where the orchestra will be playing, the house is illuminated.  After you read the program notes and the concert begins the lights dim.

Sound amplification is present in our churches.  When words are spoken by a single person, they are usually amplified so that they might be better understood by the whole congregation.  Is this absolutely necessary?  No, I don't think so, and valid liturgies were celebrated without artificial amplification for nearly 2,000 years.  Is it generally expedient to amplify sound now?  Yes, and if this technology helps to further equip the congregation for the liturgy (literally the "work of the people") then it is well employed in our churches. (Amplified singing, however, is to be avoided as it interferes with the singing of the people).

In most of our churches, a consistent level of lighting is maintained throughout the liturgy. Interestingly, candles, which are hardly necessary during daylight hours, have long served a symbolic role.

Recorded sound?  You don't hear it at the orchestra concert.  If you hear it at a "popular music" concert or televised comedy revue you probably get upset -- you're not getting what you bargained for.

Digital organs are a kind of recorded sound. They are, at worst, imitating or, at best, reproducing a sound that comes from many hundreds or thousands of pipes.  Sure, we can sample these pipes in pretty sophisticated ways, but all we can do is copy something else.  This is not a creative enterprise, it's acoustic plagiarism.

The voice of these individual pipes is largely lost.  As the sound of thousands of individual pipes is routed through several dozen loudspeakers an important spatial element is lost.  And finally, the complex interplay between organ winding and pipe speech is negated in this simulation.

No other instrument falls into this trap. Pianists, violinists and the like all want the very best instruments to play. Qualifying these ideal instruments as real seems unnecessary. I'm not denying that electric versions of these instruments can be used for effect, but in this case a real instrument is deliberately abandoned for a fake sound.

Yet organists seem content playing a fake instrument. And the reason? It costs a lot of money to have several thousand pipes of different pitches and timbres all voiced in a complementary way.

It also costs millions of dollars to own a Stradivarius, and yet there is no substantial sum of money being thrown at a digital violin concept that I know of.

If you think about what has more interest to a listener, to an organist, to a community of believers, is it a fake audio copy of bits and pieces of real organs, or is it the synergy of real wood and metal pipes, screws and nails, glue and steel that come together to make something artistic and beautiful?

Jesus didn't challenge us to make people interested in him; he called us to make disciples. I would rather be a part of a community that undertakes the building or restoration of a real instrument -- variously an affirmation of a gift from the past and/or an investment on behalf of the future of that community -- than a group that settles for a quick-fix heard through loudspeakers.

What kind of trust can we place in those who teach the faith in this community if they are regularly dishonest in passing of a digital copy as the real deal? And let's be clear: the facade pipes at Trinity, Wall Street were deliberately retained and the loudspeakers installed behind them.

However, the digital organ seems to be a deliberate attempt to deceive. There's no evaluating it on its own merits. No one asks the question: "isn't this a great digital organ?" Rather, the question posed is "you can't tell this apart from a real organ, can you?".

The digital organ seems a short-sighted investment, and I think we have plenty of that in our daily lives. Shouldn't we strive for something real in our houses of worship?

These thoughts come as a result of reading this AP article by Jeff Martin. I continue to be surprised by Trinity's shift from calling the digital instrument an interim solution to a "long-term commitment". A quick-fix simply does not have long-term viability.

In this installment of a collaborative effort to record organ stops from around the globe (email me to contribute a recording) I submit the following.

More photos from the organ at the church where Patrick Henry said "Give me liberty or give me death":

pay - owe what you

Funny story: after repeatedly sending Indiana University a payment of $.30 to pay an outstanding balance of -- yes -- thirty cents I have continued to receive bills for this amount.

After calling the Bursar's office today I am told they are probably not able to cash checks in that amount, which is why I am still being billed for it.

I'm not sure how much presorted first-class mail costs, but I'm going to guess they've spent way more than the amount I owe trying to collect an amount that they cannot receive.

David Beckham,
the soccer player
footballer,
was born in Leytonstone

An exciting new episode for the collaborative recording of organ stops from around the world: our first overseas contribution! This recording comes to us from Kathyrn Rose of Artsy Honker, where she first shared this recording.

Hear previous episodes, including the Iula from Rochester.

In 1913, at the Three Choirs Festival in Gloucester, [Herbert] Brewer was entrusted with conducting the premiere of Sibelius's tone-poem for soprano and orchestra, Luonnotar, Op. 70. The soloist was Aino Ackté.

If one considers Anglican theologian Richard Hooker a kind of archetypal choral conductor, the following begins to emerge.

The choral text is paramount and to be highly respected. It is to be studied and meditated upon. It is only by repeated study over time that one becomes conversant with the text itself and can approach the true intent of the creator.

We ask the questions: how has this work been performed and received through time? What customs are associated with performances of this work? Especially relevant are those traditions that seem to be at odds with the scripture itself. In those instances: why? Is the scripture too "difficult" or is our faith in the creator's intent too weak?

Having gratefully received the gift of the choral text and a received heritage of performance we explore issues of timeliness. Our reason, by definition, is firmly grounded in our own reality no matter how we strive to inform that reality with the past, or to bend that reality toward a perceived future. What adaptations or alterations do we find necessary after a pilgrimage toward the creator's intent and donning the mantle of our chronological imperative?

Here's another version of the chant by Hylton Stewart that I mentioned in my previous post.

This version comes from The Anglican Chant Psalter from Church Publishing. In this Psalter it does accompany Psalm 39, which is heard in this week's webcast from St. John's, Cambridge.

You'll notice a marked difference in the partwriting between this version and the one posted previously from The New St. Paul's Cathedral Psalter (now available as The Anglican Psalter): in the penultimate bar the bass and tenor parts are inverted.

It's a subtle difference, but I think I prefer the lower, darker part writing for this chant -- especially for its pairing with Psalm 39.

These verses in particular seem to fit the aching, evolving emotion inherent in this chant.

There's something wonderfully simple and effective about the initial motion in each quarter of the chant's construction.


In the third quarter begins in the relative major with the reciting note on the B♭, the fifth of the E♭ Major chord.

Looking at the intervals, and the direction of the pitch contour, there are some interesting patterns here that I think our minds perceive on some level.

The truly heartbreaking moment, for me, is in the last quarter, when the rise of a minor third reaches only the terminating note of the third quarter (and in that delicious 4-3 suspension, no less).

Bowie, Walter Russell - anniversary of the Baptism of

On this date in 1883, Walter Russell Bowie was baptized at St. Paul's, Richmond. Bowie was, as Wikipedia puts it, "a priest, author, editor, educator, hymn writer, and lecturer in the Episcopal Church".

PublicHealthIdaho.com Indicates that May 11, 1883 was a Friday. Other sources confirm this, but the Idaho public health site was higher in the Google search rankings.

Here's the latter hymn as it appeared in the Hymnal 1940:

Idaho Statehood: It makes sense that this organization would have nothing scheduled for 128 years ago given that Idaho did not receive statehood until 1890 (the 43rd state).

I think this might be the prettiest Anglican chant I have heard in a long while. 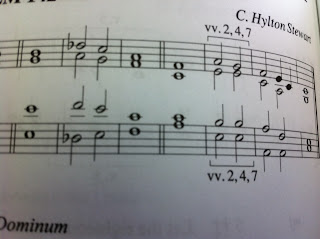 Hear it yourself at this week's webcast from St. John's, Cambridge.

Today, on the 178th anniversary of his birth, I want to take a moment to remember what many people know about Johannes Brahms.

Several years ago I was involved in a performance of the Brahms Requiem, which was picked up by a local organization and widely publicized as "Johannes Brahms Reunion."

What does that even mean?

I can only imagine the thought process in that kind of situation. Oh, that looks like the name of some classical composer, so let me make sure I spell that right, and then an R word, got it. Okay, send this to thousands of people . . .

I'm not really interested in actually getting together with Brahms at this point. But neither, it seems, is of the general public aware of or interested in anything that I do.

It's a strange world.

At least Brahms might be gaining a little more name recognition . . . Yes, it's by that George Dyson.

Clicking on the above image of the title page of the book will take you to Google Books where you can read the whole thing.

This particular copy was checked out of the University of California, Berkeley library twice, it seems: once in 1940 and again in 1987.

Now that we've blogged about it here, it will be checked out by dozens thousands more!