5 October 2013, RICHMOND - Nothing ever seems to go quite according to plan when Cameron Carpenter comes to Richmond.

On Friday night he returned to the historic Byrd Theatre to perform on the Wurlitzer organ there for the third consecutive year. Actually, that may not be quite true.

From what I hear about his first performance at the Byrd in 2011 (I did not attend that performance, though I did attend in 2012), he started playing a bit on the Wurlitzer and then moved to his own electronic touring organ. On Friday, however, there was no part of the organ that was left unexplored, and the touring organ was still on the truck. 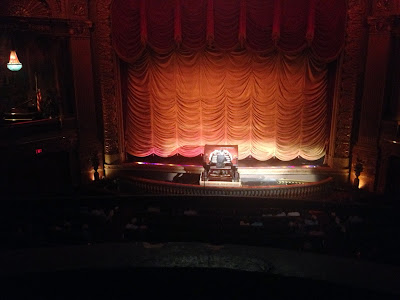 One thing to know about the Byrd Theatre's organ is that it works, mostly. There are a few sour notes, especially in the upper ranges of certain stops. But the main thing that Carpenter and the Theatre would like to restore is the organ's combination action. These are the little, round, white buttons under the keyboards that summon pre-set combinations of sounds. In Carpenter's hands, a fully functional theater organ becomes the ideal vehicle for his own wildly colorful imagination and impressive technical ability.

So hearing Carpenter at the Byrd is like hearing him "unplugged".

The evening began without announcement and with Carpenter taking the helm for Walton's Crown Imperial. He seemed to struggle through this, quickly adjusting stops on the fly. The performance seemed unstable, like an empire on the decline. This quality was exacerbated by quarter-second hesitations while Carpenter repeatedly reached up to change sounds in key moments. Certain chords were "wrong", perhaps harmonically altered to suit Carpenter's whims. But if they were intentionally altered they did not serve the music.

Carpenter is the "shock jock" of the organ world. The program proclaimed that "You'll swear it's Bowie performing Bach", and at the end of the first half we finally did get some Bach. And here's where things really started to come undone.

Carpenter introduced the second movement ("Lento") of Trio Sonata No. 6 in G Major, BWV 530 as having a strange "sinuosity". In Carpenter's hands and feet this was only strange, and it was not helped by a false start due to an inadequate registration; Carpenter had chosen a solo stop with far too many dead notes to hear much of the melody. It may have been convincing on a Wurlitzer in excellent repair, but such an instrument the organ at the Byrd is not. A quickly revised registration proved that this Trio Sonata was simply a bad fit for this organ. The extreme rubato further added to the general uncertainty. The result was "amateurish", as I overheard someone say at intermission.

From the E minor conclusion of the Trio Sonata movement, Carpenter proceeded without interruption to the "Wedge" Fugue in E minor, BWV 548b to close the first half. The result wasn't so much a rock star performance as it was an organist struggling to regain control of his program.

After intermission the recital became nearly completely derailed. After a couple good tunes including "Moon River" Carpenter found his instrument insisting on a high E-flat in a reed stop long after the final chord.

Carpenter, who when he addresses the audience never fully turns off the organ bench, seemed truly at a loss.

"One never knows whether to keep going," he said, before he mused aloud about Percy Grainger's "Movable Do", a piece that Grainger wrote for a ciphering harmonium. Carpenter wisely chose to improvise around the note for a while. Eventually the note wavered and disappeared, so Carpenter created another, higher "cipher" to symmetrically close this short, witty interlude.

There was a collective sigh of relief when the final chord released into the expected silence. "I learned an important lesson tonight:" Carpenter mumbled to the audience, "you always keep going".

As part of what seems to be a quest to re-imagine movements of the Bach Cello Suites, we heard Carpenter's take on the first Bourreé from the Third. This, too, was marred by unfortunately placed dead notes, especially in a climactic pedal statement of the fugue subject. Yes, there was a fugue. Carpenter's lengthy fantasia culminated in an attempt to outdo Bach, and if he didn't quite best the old master, he certainly got his attention.

And this is maybe the heart of the matter. Carpenter is a formidable talent, but much of this music would have been so much better on a functioning pipe organ of any type (be it theater or otherwise). And please note that I am reviewing the performance here, not the fundraising effort for the Byrd Theatre, which is an important, separate issue.

At best, Carpenter appeared to be a good theater organist on Friday night, but in the more adventurous pieces, he and his program were ill-prepared for the Byrd.

But more than this, one gets the sense that Carpenter is starting to chafe at the corner he has painted himself into. The relentless virtuosic pedal work that is (or was) his claim to fame was largely saved for a brief encore. If Cameron learned that he must "always keep going," perhaps a change of direction is in order. It may not be so much a challenge for him to outdo Bach as it is an increasing challenge for him to outdo himself. This challenge might be reflected in the audience at the Byrd, noticeably smaller than last year's.

As it turned out, Carpenter wasn't so much unplugged as he was uninspiring.

This review may be updated through Monday as a I continue to reflect on the recital.