Really the word "hymn" refers to the words. But for most people the music comes to mind just as quickly, if not more so.

Of course, a congregation needs both words and music to sing a hymn. Otherwise I guess they could just mumble some poetry together, or, alternatively, hum something for a while.

Note to self: write some intentionally wordless hymns. Approach publishers.

But sometimes a melody is written for words that so encapsulates their sentiment that the result is stirring, compelling, and nothing short of miraculous: a triumph of the great symbiotic art of hymnody.

Walter Russell Bowie's two hymn texts are provocative and "have been judged as among the finest by an American author written in the first half of this century" (Hymnal 1982 Companion). They are "Lord Christ, when first thou cam'st to earth", and "O holy city, seen of John".

Walter Russell Bowie was a Social Gospel progressive who was baptized at St. Paul's Episcopal Church in Richmond, Virginia in 1883 (just 21 years after Jefferson Davis was baptized there). He would serve as rector of the parish from 1911-1923. Just prior to assuming this rectorship, Bowie was asked for a hymn based on Revelation 21 by Henry Sloane Coffin for the collection Hymns of the Kingdom of God (1910). The result is "O holy city, seen of John".

One of Bowie's stanzas, however, seems not to have been handed down in most versions of the hymn. It appears in the original hymn text as stanza 2:

I'm particularly fascinated with the connection between Howells and the marvelous words of Bowie because Howells is, quite simply, my favorite composer of twentieth century church music, and I was the organist of St. Paul's, Richmond for five years (2010-2015). It was a delight to relish this tune (and sing it often) in a parish so closely linked with Bowie.

I have written before about the two Herbert Howells hymn tunes for the both of the published hymn texts of Walter Russell Bowie (Bowie, Walter Russell - connection to Herbert Howells). Mostly, I wrote of my perplexity that the tune in the Hymnal 1982 for Bowie's "Lord Christ" is in a major key (Hymn 598)! But today, on Howells's birthday, no less, I want to turn to the other tune, SANCTA CIVITAS.

Howells's tune, written in 1962, is extraordinary. In fact, Erik Routley, the prolific church music scholar, names it one of "Six Great Moments in Twentieth-century Hymn Music"

Tangent: Routley's work on hymns is always provocative. Of the six he names three are "bestsellers", one is mostly hiding in plain sight (Howells), and two of them I've never heard, nor can I find. There's more here to research, as always!

Howells's name for the tune, SANCTA CIVITAS, is Latin for "Holy City," making the text-tune connection clear. But more than that, the name is surely a reference to the large choral work by Vaughan Williams with that name. It was, after all, a close encounter with Vaughan Williams himself at the 1910 Three Choirs Festival that set Howells firmly on the path of being a composer.

Howells manages the melodic modality masterfully, with the music meandering from D minor to an F Major finish. The intervening notes between stanzas (they are in the original hymn but, most unfortunately, edited out of the Hymnal 1982) raise the Tonic to the Mediant so that the successive stanza can fall into place without a hitch. 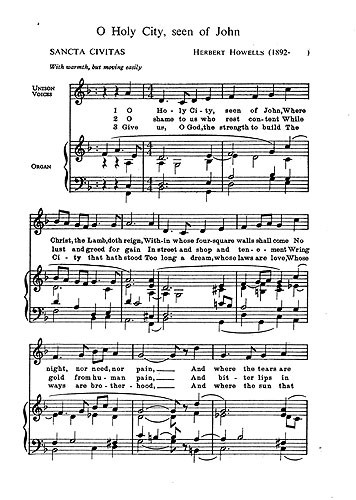 There is what I believe to be an intentional seamlessness to the hymn accompaniment that arises when these inter-stanza passing tones are used (as in the wonderful recording from St. Clement embedded above). This is up to interpretation, to some degree. I can find another recording that does not treat the accompaniment this way.

If the "seamless" approach is what Howells had in mind, this is by no means a new technique, though it is an innovation on it. Think of the hymn tune ENGELBERG, written by Stanford, Howells's mentor, in 1904. The single, solitary "thump" allows the hymn accompaniment to be continuous, which has the affect of somewhat blurring the line between the strophic hymn form and something through-composed. And this is, in fact, the common modern-day performance practice with this tune. Howells's innovation is to simply expand that pedal thump into a treble "doo-doo" — which, incidentally, builds more time into the "join" between the stanzas for a breath but without making the interlude needlessly fussy.

Still with me? Good, because we haven't even brought up the final stanza yet. Howells gives this text the full treatment with a slightly altered harmonization and supremely musical descant. Not a single note is wasted, and the sopranos' expertise is fully demanded — this is not a trivial sing! But the result, to my ear, is so completely and utterly thrilling.

A melody of great sweep and dignity, with a descant for the final verse [sic] which gives the impression of having been conceived along with the tune and of being a natural efflorescence of it.

Consider the final stanza and the city that rises "in the mind of God". It is of divine imagination. And this inspired descant catches our souls and flings them heavenward where we chance to dream of things eschatological and that poorly-understood sentiment in the Lord's Prayer "thy will be done, on earth as it is in heaven".

The unchurched Howells finds a way to join what we would call Bowie's Anglo-Catholic Socialism if he weren't in fact a Southern Churchman Social Gospelist.

Another thing that is lost in our modern hymnals is editorial direction. Howells, who never fails to give descriptive language, here gives "With warmth, but moving easily". I can't quibble at all with the St. Clement recording above, but I do want to note that it is a choral recording. I think that for a full congregation, the organ will want to provide a bit more "fire" for the warmth. The word "ardente" from the anthem "Like as the hart" comes to mind.

I suspect that, for many parishes, this tune is hiding in plain sight. If we did a survey I think we would find that the American tune on 583 is sung for these words more than 582. And there is precdent for a Howells tune having a slow start. MICHAEL first appeared in The Clarendon Hymnal in 1936 and was neglected for over thirty years. Though it doesn't appear in Routley's "Six Great Moments", it doesn't need to. It exploded in popularity, and it now has a Triple Platinum Hymnal hanging in its living room.

But perhaps SANCTA CIVITAS tends to be overlooked because the Hymnal 1982 doesn't present the hymn tune as Howells intended.

We can fix this.

I implore you in choirs and on organ benches: buy this hymn from Novello, or play it out of Hymns Ancient and Modern.

Your congregations will allow you two little extra notes, I promise.

And Howells wants it that way.