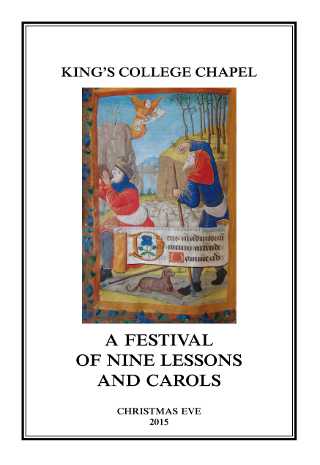 Now that this blog has offered its traditional Preview of the music for this year's Festival of Nine Lessons and Carols at King's College, Cambridge, England, and now that the college has posted the official service booklet (direct link to PDF) it seems meet and right to delve a bit deeper into the music at this year's service.

We begin this series with "The Flight" by Richard Causton

The words of "The Flight" come from poet, and fellow blogger, George Szirtes. The blog reveals that Szirtes and Causton may be in the early stages of working on an opera together.

Szirtes himself came to England as a refugee (Poetry Foundation, Wikipedia), and the words of "The Flight" rely on this image. Its tragic repeated line haunts the entire poem: "we move on forever". These words take on extra significance given the extent of the present Syrian refugee crisis.

The lines "The sea is a graveyard / the beach is dry bones / the child…" may also give one great pause. The proximity of the world "child" to a beach of death conjures up one of the most significant photos in the news this year.

On December 10 a report featuring an interview with Stephen Cleobury and choirboys aired on the BBC. The report also includes excerpts of "The Flight" in rehearsal. It starts at 40 min. 40 sec. in to the program World at One.

The reports from the boys are "difficult" and "glissandi".

"The story is about a small child, something that connects with peoples' experiences very strongly," Cleobury says in the interivew. "I think it's great to have something that is so strongly tied in to the contemporary scene."