I'll never forget the first time I sang the hymn tune SAN ROCCO. It was at a Choral Evensong sung by the choir of Hereford Cathedral in October 2002 at Trinity Episcopal Cathedral in Cleveland, Ohio.

I believe that this service was just one of the regular Wednesday Evensongs still offered regularly at Trinity, Cleveland, which, while a bit smaller, bears a striking resemblance to Hereford.

I can't remember how full the building was, but I would wager it was a bit fuller than they typically get on a Wednesday night. On the other hand, it certainly wasn't full or even close to it, which was a real shame because this service was something. 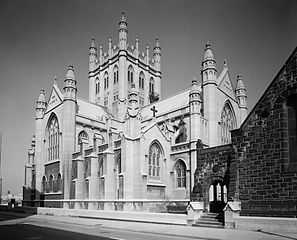 At the time I was a junior in college and just a few weeks earlier had begun working in an Episcopal church. I was excited about going to this Evensong but I didn't really know what to expect. Had I even ever been to an Evensong at that point in my life? Probably not.

But I'd picked up a Prayer Book and, having done a bit of homework, I sort of knew what it was about.

This was also the first time that I had heard an English cathedral choir in person. I remember being surprised that at least one boy seemed to have forgotten his white surplice back in England. He was easy to spot in the procession because he came down the aisle in only his blue cassock (the cathedral in Hereford is officially "Cathedral Church of St. Mary the Virgin and St. Ethelbert the King"; churches named after the Blessed Virgin Mary typically wear blue, I would learn later). How embarrassing for him, I thought. Then I saw another chorister dressed the same way. And then another. And I remember thinking that this must mean something too, but what?

I was on the edge of my seat because everything was new that night. There was the newness of the Prayer Book, this American document that prescribed liturgy in the Episcopal Church, but was a direct descendent of a book of the same name from England. It was this English book that the Hereford Choir would know, so a close observation of the service might tell me more about the worship tradition in which I was now engaged.

I vaguely remember checking the lectionary in the back of the book to see if they had chosen the right lessons. I still do this today when I get distracted (though now only with the daily lectionary).

It was all so much to take in, and it was all so grand. And the singing was fabulous. The Psalm was beautifully chanted. The liturgy was seamlessly conducted and very dignified.

But the thing I remember the most clearly was the final hymn.

It was SAN ROCCO, and it was glorious.

Trinity, Cleveland is a bit unusual in that there is not a big organ up front the way you would expect to be. Rather, there is a great big Flentrop in the back. It's more the kind of organ that Bach would have known and less the kind of organ you expect to find as the main instrument in a large Episcopal church.

If you enter from the liturgical West doors at Trinity, Cleveland, you walk under the lofted organ to enter the nave. In plain view is a tall metal spiral staircase that one must ascend to reach the organ.

And so it was at the end of this Evensong that whosever it was who had climbed the stairs and was accompanying the service cracked open the Hymnal 1982 and launched in with the introduction to SAN ROCCO. And – here I rely on my more than a dozen-year-old memory of this event, but I believe it to be credible – the introduction to this hymn was in D-flat.

The reason I feel somewhat confident in this assessment is for two reasons: 1) I was working on my pitch identification with great intensity back then. I would keep track of key areas and such whenever I attended a concert or recital (and would often notate them in my program to keep myself honest); and 2) it sounded a ever so slightly funky in the temperament on that Flentrop, which leads me to believe that it wasn't C Major.

If all this is correct it means that the experience I remember so vividly involved hymn 253: "Give us the wings of faith to rise", the words of Isaac Watts, and a splendid modern hymn tune by Derek Williams.

Earlier on this blog: A few years after I attended this service the words of this same hymn were included in fallenness - flatness as.

I was swept up in the drama of the music, and they paired so well with the words we were singing (the more I think of it, I'm sure it had to be Hymn 253. The tune pairs well with Brian Wren's "When Christ was lifted", but it's just not the same!).

And part and parcel of the drama that I was experiencing was this viscerally propulsive two-bar interlude that comes out of one stanza and leads seamlessly back into the next.

Embellishing the space around the break in the stanzas is a modern hymn tune trope that began with the pedal thumpery of Stanford's ENGELBERG. It's a quest to eliminate the amorphous pause between stanzas (the organist's perpetual necessity and dilemma) and offer a musical unification of the poetry that is (mostly) whole.

As an aside, it's the kind of linkage we so sorely need between the last two stanzas of Frank Mason North's long-lived Social Gospel hymn "Where cross the crowded ways of life" by Frank Mason North.

It's perhaps the most final sounding semi-colon in all of hymnody, and without one of these "revolving door" tunes, how can it be otherwise? Maybe someone will give us a Long Meter equivalent of SAN ROCCO. Maybe someone already has!

But, in the mean time, we still have SAN ROCCO, the "richly textured, thoroughly modern tune". Its sweeping ascents and its and audacious range. It defies gravity a bit, this tune.

And maybe that's what that interlude is about. It's so bold, the hymn tune, that it needs something else a bit more weighty to bind it to earth before it goes soaring through the air once again like an exuberant albatross. It's touching base, perhaps.

I'm talking here of the two-bar "Optional Interlude Between Stanzas" in the Hymnal 1982. You can hear it employed on the very find recording The English Hymn, Vol. 1 - Christ Triumphant recorded by the Wells Cathedral Choir under Malcolm Archer.

I have to say, I've learned that the Hymnal 1982 can slightly sanitize some of the more pioneering elements in modern hymnody, and I wonder if the word "optional" might be an American editorial insertion. At any rate, I'd be curious to see the original publication of the tune and figure out if the composer really considered it "optional" at all.

Because for me personally, this interlude is part of the whole experience.

And when I start this hymn up this morning for All Saints' Sunday I'll be transported back, once again to that Evensong – back to a chilly October evening in Cleveland.

About a year and a half after my first visit to Trinity, Cleveland I returned to that same cathedral on a May morning to be confirmed into the Episcopal church.

And though it wasn't included in the festive Eucharistic liturgy again that day, the words and the inspiration I drew from that hymn at Evensong were with me. It had kindled in me a zeal. This hymn had started me on a path and led me back again, to seek Confirmation and a committed life in the Episcopal expression of the Christian faith.

In a very real way, SAN ROCCO changed my life.