19 December 2016
An in-depth listen to a recording of the 1962 Festival of Nine Lessons and Carols from King's College, Cambridge 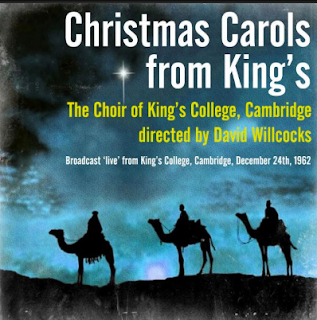 Maybe others are already aware of this, but we were delighted to stumble upon a recording of the 1962 Festival of Nine Lessons and Carols from King's College, Cambridge. This is a live recording of the service on that Christmas Eve more than half a century ago. The director of music at that time was David Willcocks.

The recording called "Christmas Carols from King's" and is available on Spotify from "Digital Gramaphone". We are not sure about it's availability elsewhere.

One of the first things to jump out at us is how much the conventions surrounding hymn playing and singing have changed.

There is no descant on the opening hymn, Once in royal David's city. Willcocks's descant bears a copyright date of 1970 in Carols for Choirs 2, the same year that book was published, so it is certainly possible that he hadn't conceived of it yet.

Even after a rhythmic introduction to the hymns, the organist gives a one-beat "gathering chord" at the start of each stanza of the hymns. This is not a practice that we have heard anywhere else, though we don't often listen to liturgical recordings from English collegiate chapels from the 1960s. We are not sure if it was common to accompany hymns this way, or if this was a convention developed for this broadcast.

It is certainly a bit odd to listen too, especially when the left hand enters with the tuba for that marvelous Willcocks descant to "O come, all ye faithful".

In the hymn "God rest ye merry, gentlemen" the word "wind" is made to rhyme with "mind" in the lines of the third stanza, something which is not done at King's (or anywhere that we know of) today.

The organ also plays brief introductions to the carols, something that is not done nowadays.

In terms of the carols, a standout to us was "Born in a manger". The Spotify information does not include composers, but with a bit of sleuthing we hypothesize that this carol was written by Christopher Morris, who you might know as the editor of much music published by Oxford including A Sixteenth-Century Anthem Book.

Morris died in 2015. His obituary from the Telegraph begins

"Christopher Morris, who has died aged 92, was the inspiration behind Carols for Choirs, first published in 1961 and later extended into four volumes, which, in the words of the composer John Rutter, 'changed the whole sound of Christmas for everybody who sings'."

If anyone deserves to have contribution to Anglican Christmas music recognized at contemporary Carol services, Christopher Morris does. "Born in a manger" is lovely, brief, and quite effective.

It seems to us utterly shocking that 1) we don't know the full picture about what music was sung at services like these in Willcocks's time 2) that a piece as good at this one is now almost completely unknown and unrecorded. Why has it not been sung recently?

This brings us to the final phase of listening to this recording, which is placing the music in its liturgical context. Thanks to this recording we know exactly what the carols are (with the exception of composer of "Born in a manger", which we hope to confirm very soon). Since the readings are not included, we are left wondering at the precise placement of the music.

This calls for some more speculation, but it is very possible that the service in 1962 looked like this: