In part 1 of this essay I introduced the three constituent elements of beauty according to Thomas Aquinas: integritas, consonantia, and claritas. And we examined the first element, integritas, or integrity, as it relates to electronic organs.

Do Thomas's two other aspects of beauty have something to tell us about the nature of electronic organs?

Proportionality is a common problem with electronic organs, and I think a big strike against many of them. One of the reasons that a parish might be attracted to an electronic organ is because of their ability to acquire a "larger" instrument than the realities of a pipe organ would allow. The perceived advantage of an electronic instrument is that it has greater versatility than a similarly priced pipe organ. There would be more variety of tone color, perhaps even an additional manual, and more "toys" for the organist. But in reality, the tonal scheme is too "big" for the space it is trying to fill.

Too often we see these extra elements in the electronic organ blown way out of proportion. The gimmicks and flexibility allow it to sound like an English "cathedral" organ one minute, and a North-German-style instrument in a historic temperament the next. This is just disingenuous. Just because you've decided against a traditional pipe organ doesn't mean that the congregation should be sonically disoriented by hearing many hundreds of stops, and several different style organs in the same space. This is a bridge too far, as is the MIDI harpsichord that comes standard. The increasing technicization of the electronic organ makes this kind of variety a selling point, but it destroys the consonantia of the instrument.

(Really, who would have any reason to use a harpsichord coming through those same loudspeakers? Absurd!)

Is it possible to build a real pipe organ out of proportion with its space? Absolutely! But it's much easier to do this with an electronic installation. 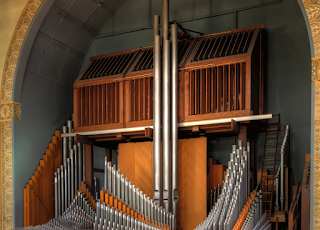 This is a little trickier, but I think it affords us an opportunity to speak of an element of organ design that we have neglected in this conversation: the organ's visual design.

Pipe organs are very physical installations. The placement of pipes in some kind of chamber in relationship to the placement of the choir (or other instruments) and to the rest of the worship space (or hall) is all navigated with great care. The resulting layout also has implications for how the organ looks from the "outside".

In electronic instruments there is no need for any substantial physical or visual design. On the contrary, most electronic organ installations go to great lengths to hide their loudspeakers from view. And because loudspeakers are more easily placed than ranks of pipes, these sounds can be generated from locations that would be unrealistic for pipes. This is a principle that creates great cognitive dissonance and works against the element of claritas. ("That sounds like a room full of pipes!" "It's not, it's just a couple loudspeakers.")

In the very worst cases, claritas is confused by placing loudspeakers behind a facade of fake organ pipes. (I'm still thinking about the purely electronic organ here, but I think that a hairsplitting discussion of "hybrid" organs is also probably worth our time.)

Pipe organs, with few exceptions, have their pipes on display to some degree. The Werkprinzip of North German organ design meant that the claritas of an instrument was fully visual as well as auditory: the divisions of the organ could be fairly easily seen and understood.

An Americanized version of the Werkprinzip occurred with many 1950s and 1960s organs by Holtkamp, and I have a real soft spot for these instruments. Though others may find them too angular and passé, I find them distinctively beautiful. They make my heart skip a beat. Two that I would single out for particular praise are the organ at Setnor Auditorium, Crouse College, Syracuse Univeristy and Battell Chapel, Yale Univeristy.

Different styles of organ facades have been in use throughout different periods of organ building. But in every period of organbuilding, the organ's facade has remained a facet of pipe organ construction. Unenclosed pipes of polished metal usually adorn the case of the organ and serve as a visual cue to the location and size of the instrument. (The Fisk at Benaroya Hall, Seattle is a late-twentieth century organ that also uses wood pipes in the facade.)

This is an important element in this discussion because organs are truly inspiring instruments. And, after hearing fine organ music, one of the first ways that young organists are inspired to study the instrument is by seeing one.

With the electronic organ, however, there are no pipes of any type to see. And if there are pipes on display it just furthers instrument's inherent dishonesty.

There is no claritas in the electronic organ.

The emperor has no clothes, and he is not beautiful.