22 September 2021
A Personal Note: St. Peter's Organ and the Pandemic 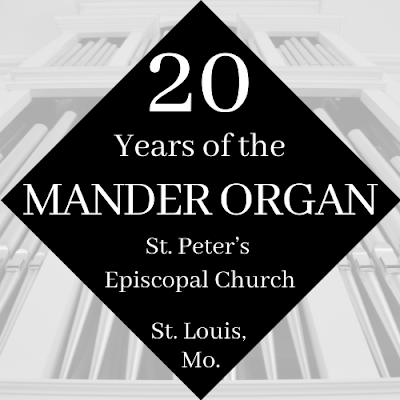 Twenty years ago, right at the very same time that the St. Peter’s organ was being installed, I was fortunate to go on a tour of Germany with the Houston Bach Choir and see many historic organs in that country. It was my first trip to Germany, and the church architecture and the sounds of the instruments I heard and played there were astonishing. But recently, I’ve been reflecting on one detail of that trip in particular: seeing the mouths of organ pipes.

The mouth of the organ pipe is the visible gap in the front of the pipe. This is where the column of air is set into motion; it’s where the “whistle” happens in the pipe if you like. On at least one of these historic organs, the area surrounding the mouths had been decorated to become a human face: there were eyes, a nose, some hair, and it made the mouth look like, well, a mouth! It said something about how Germans (including J. S. Bach) thought about their organs some 500 years ago: organs themselves have a voice and are meant to sing just as much as people are.

Read the rest on St. Peter's, St. Louis's Keys to the Kingdom music blog. The parish is celebrating the Mander organ's 20th anniversary.