03 December 2017
2017 Festival of Nine Lessons and Carols: In the bleak mid-winter – Harold Darke 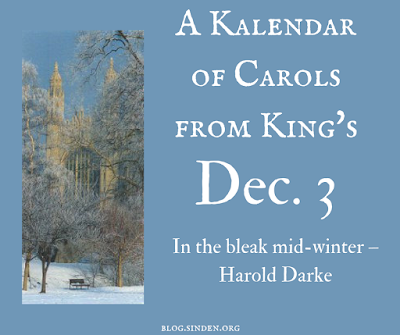 This series began with the opening hymn and the Bidding Prayer.

A few years ago, the BBC Music Magazine polled directors of music about their favorite Christmas carol. Guess which one took the number one spot?

That's right: "In the bleak mid-winter" by Harold Darke.

It's hard to argue with this carol by Darke, who deputized for Boris Ord at King's in 1941.

It's a bit of a chameleon, this carol. It appears at this service many times and in different places in the service.

This year it's being sung as the Invitatory Carol (after the bidding prayer), just as it was in 2000.

It has been sung after the Fourth Lesson in 1997

It was sung after the Eighth Lesson in 2009. In the scattered records that I have from services in the 1970s, it seems to have been frequently sung after this lesson.