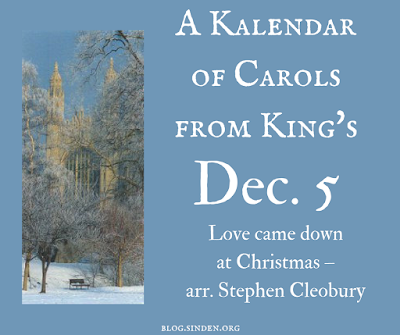 It won't surprise you that the Director of Music, Stephen Cleobury, tends to include one of his carol arrangements in the service every year.

In 2015, Cleobury chose not to include one of his arrangements. Rather, he chose three arrangements by David Willcocks, his predecessor, who died in September of that year.

Over the years, Cleobury has been able to include a wide selection of his carol arrangements.

In 1999 there was no Cleobury carol, though in 2013 we got two. So the average remains about one a year.

This year, we get a repeat of one of those two arrangements heard in 2013: "Love came down at Christmas"