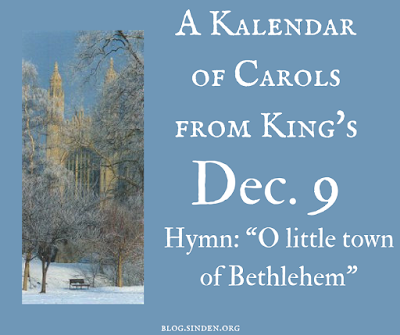 We have reached the second piece of music after the Third Lesson. At this point in the service, we get a hymn, the first since the opening hymn "Once in royal David's city.

While the first hymn is fixed every year, there is some variability in which hymn is sung here. But the choices seem to be limited to four hymns in recent years:

Allow me to get ahead of myself a bit to say there is far less variability in the two hymns that are sung after the Seventh Lesson; at that point, the hymn choices are either "God rest ye merry, gentlemen" or "While shepherds watched their flocks by night".

You'll notice that "God rest ye merry, gentlemen" appears on both lists. There was the great Crossover of 2009 when this hymn jumped from the repertoire for after the Seventh Lesson into the slot after the Third. As I'm sure you recall it was quite a scandal, and it has not been repeated. So, more accurately, one might say that there are three choices of hymns for after the Third Lesson.

And one of them is "O little town".

Most in Cambridge and its environs surely know this hymn to the tune FOREST GREEN.

Americans tend to know the tune to ST. LOUIS.

Among American Episcopalians, I think preference is fairly evenly split between the two tunes. With Choirs almost invariably preferring FOREST GREEN, and congregations at large (particularly those members that were raised in other Protestant denominations) preferring ST. LOUIS.

The Episcopal Hymnal 1982 includes both tunes and seemingly expresses a preference for FOREST GREEN, the "first" tune, appearing at Hymn 78. The other appears at Hymn 79.

Speaking as someone who actually lives and works in St. Louis, I have come to understand that there is no geographical affinity for the eponymous tune here. I've created a handy graphic to help you remember that: 
Comments:
You make no mention of the new harmonisation of this carol, by Stephen Cleobury, heard for the first time in the service this year. Traditionalists may not like the style of the harmonies, which are more reminiscent of Charles Wood's This Joyful Eastertide, giving the piece a distinctly spring-like feeling, but more open-minded listeners will enjoy the turning around of the lower parts which Cleobury has employed.