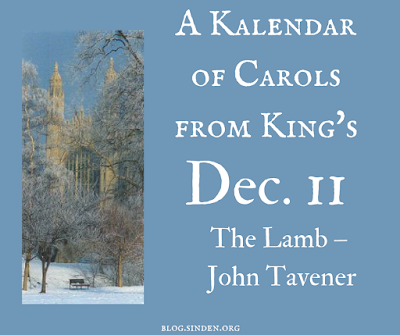 How funny the little word "carol" is.

Really a whole essay should be written (and perhaps has) about what it is that makes a Christmas carol, and why William Blake's poem "The Lamb" qualifies in this instance, and how John Tavener's mirror-image counterpoint helps the whole thing work.

But more to the point, Stephen Cleobury's retirement is on the horizon (more on this later), and this carol was sung in 1982, his first Carol Service, 35 years ago.

It was not technically commissioned – all lists of commissioned carols begin 1983 with Lennox Berkeley's "In wintertime" – but, having been composed earlier in 1982, Tavener's "The Lamb" was the first truly new carol heard at the service.

There is a real excitement that new music brings to this story, and the stability of the architecture and the liturgy seem to harness it, and amplify it. This doesn't mean that composers don't fail here. I think they sometimes do. But if they have succeeded in making something of worth, the Chapel, the Choir, and the Service prove willing and ready partners.

For Cleobury be able to bring something of such radiant simplicity to his first Carol Service at King's was a real feat. Unrepeatable, even. Except that he has brought new sounds and new ideas into the music of this service year after year.

That is, in part, what I think this carol means in this year's service – perhaps the last time that Cleobury will direct it on a December the 24th. It is a nod to the ethos of this service under the Cleobury era. From 1982 to now: from Tavener to Watkins.

It is no less than being open to those possible moments of profound ecstasy in the light of the Incarnation.

It is new music that can "gather into one things earthly and heavenly".

It is writing and performing new music as a sacramental act.