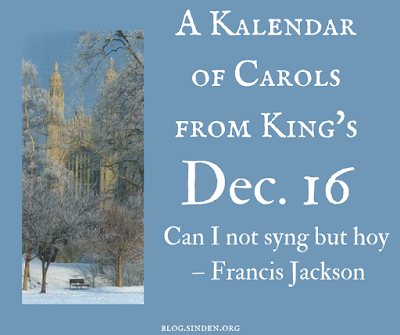 This year, after the Seventh Lesson, we hear music of Francis Jackson for the first time at this service. Jackson was born in 1917. He is still living and celebrated his 100th birthday earlier this year.

He was for many years the organist and director of music at of York Minster. He succeeded Edward C. Bairstow in this position and wrote a biography about Bairstow called Blessed City: The Life and Works of Edward C. Bairstow. His own autobiography, published in 2013, is called Music for a Long While.

Many church musicians will be familiar with music published in the Eboracum Choral Series under Banks Music. Francis Jackson was the general editor of this series, and this carol was their first choral publication (bearing the number ECS 1).