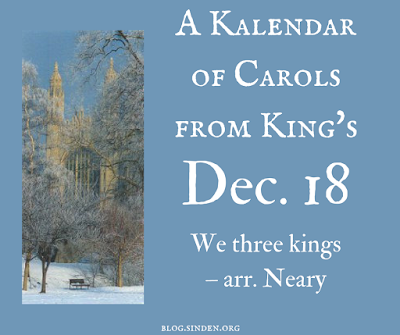 Martin Neary's arrangement of "We three kings" has not been performed at this service before, though it has been sung twice on "Carols from King's" broadcasts (note that this is a separate, pre-recorded service).

Rather than yammer on about this carol, and why I like it (particularly the soprano bit during the "Myrrh" solo) I'll just let you view the score. Thanks to Tim at Encore Publications for sharing this with me.

Here's the nicest version I can find on YouTube, much nicer than what I linked to in the preview.