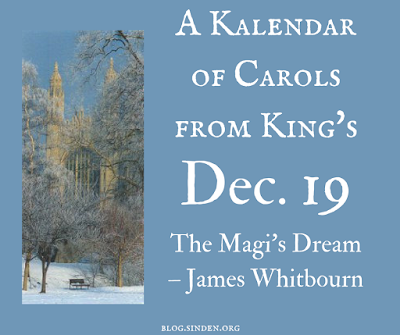 Having heard the obligatory "three king's" tune immediately prior to this carol in the service, we can venture a bit farther afield, musically speaking.

With the rest of the service prescribed (Ninth Lesson, "O come", Collect, Blessing, "Hark", In dulci jubilo) this carol really has the last word in many ways. And what a raucous last word it has! (Listen to the whole carol.)

James Whitbourn was last heard in 2004, but with a rather tame, acapella arrangement of a Praetorius tune with English words.