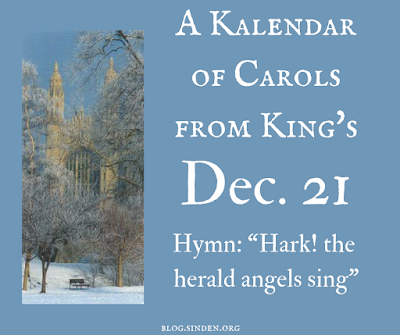 After "O come, all ye faithful", we get a final collect and blessing.

Then, we have what is perhaps the very oldest musical tradition in this service, going all the way back to 1918: the singing of "Hark! the herald angels sing".

In the first year of this service at King's, the service opened not with a hymn, but with an Invitatory Carol (Up! Good Christian folk and listen). The familiar processional hymn "Once in royal David's city" then followed.

A brief tangent to say how fascinating it is to actually see the 1918 service. From what was written about it, I had always assumed that a different processional hymn was sung, but this is not the case.

But even with this slight alteration, one can argue that the service did not technically open with "Once in royal David's city.

And, as I wrote yesterday, "O come all ye faithful" did not follow the Ninth Lesson in the first year of the service (it followed the Sixth).

So then, the very oldest completely unchanged part of this liturgy is the final hymn, "Hark! the herald angels sing".

The arrangement of the third and final stanza is by the director of music.