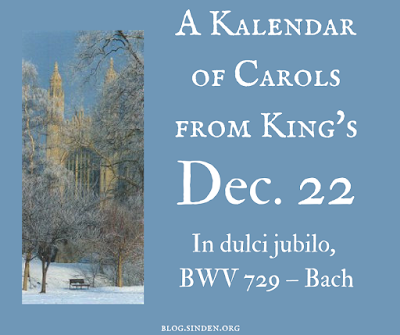 There's not much more to say about that. It would be hard to imagine the service concluding any other way.

This is not to say that there couldn't have been some variability with this over the last 100 years, but this would require a close examination of all the services. At least from 1982, this voluntary has been a fixed element.

Note what has happened in this service toward the end. Since the Ninth Lesson all the elements have been "ordinary" and unchanging. The lesson, the two hymns, the collect and blessing, and now the first voluntary.

This is a clear signal, year after year that the service is ended. It is at the second organ voluntary that the organists again have some input into the music. And we address that tomorrow.