The order of the service concludes with today's entry, following discussions of 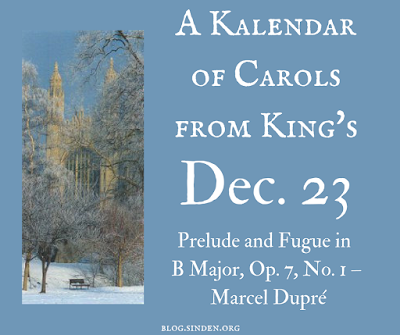 As the second organ voluntary thunders out (Prelude and Fugue in B Major, Op. 7, No. 1), let's quietly discuss a few things.

First, the wrong number is listed for this voluntary in this year's service leaflet, which is an unfortunate error.

The booklet has undergone a redesign which I generally find unobjectionable. I am puzzled, however, to the lack of first names of the composers. This seems an odd choice and is a change from previous years' booklets.

Aside from this, the design this year is marred by justification and capitalization inconsistencies. It is a poor partner to a liturgy and music which have undoubtedly been prepared with great care and attention.

But I don't want to dwell too much on that. I want to turn our attention to the director of music.

Stephen Cleobury directed his first Lessons and Carols service in 1982, and by my reckoning that makes this year his 35th.

It is an impressive tenure by length alone. And then consider his influence on this famous service. The institution of the "commissioned carol" has surely breathed new life into what could have become much more of a museum piece.

Consider also the way that the service captures our attention in the modern era. There are webcasts to listen to (thank goodness, because otherwise, how would American church musicians listen this year?), and the commissioned carol has lately been released for download shortly after the service ends. If you're a fan of Carols from Kings (the separate, pre-recorded service for television) you can even pay to download that too.

The service has no shortage of fanatics, and I pray that it continues its storied tradition for many years to come.

But given that next year is the 100th year of the service, and that Cleobury is surely nearing retirement, we at Sinden.org predict that we are listening to his penultimate service this year and that 2018 will be his last.